FWIW ~ I found an addon that allows longer straight list (without More) of sites. Longer than Flagfox 6. And has middle click to open site in new tab and keep list open. And renders favicons. And does not need page refresh like Flagfox 6 does at my homepage.
for example 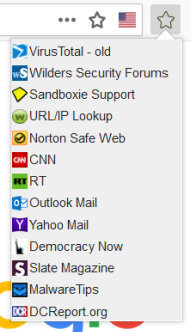 YMMV
Edit: seems I can only add one attachment? Two attachment work in Preview. Then I lose one upon Submit.
Thanks
Last edited by bjm_ on Sat Jan 20, 2018 8:00 pm, edited 1 time in total.
Top 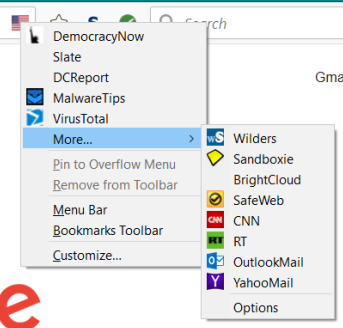 Well, what's the addon called? There's no way to tell from the screenshots. (sorry about the attachment shenanigans here; probably an anti-spam measure)

My guess would be that its menu opens on left-click instead of right-click? You can hook up a popup to left-click and reinvent the wheel to make a custom menu without the dumb limitations imposed by Mozilla. Flagfox allows you to bind actions to left-click, as well as double and triple left-clicks, so that's not viable here. I really should've filed the 40 or so Mozilla bug reports I've got on my todo list, but there's just so much to do, and I haven't made the time yet. Complaining about the pointless limits like this is near the top of that list.

Ctrl+click to open a Flagfox action in a new background tab does still work as it does in Flagfox 5.x, though Firefox closes the menu each time, which is annoying. (again, their API is crap)

As to favicons, non-default actions which don't have standard favicons don't load because the site is sticking it in a meta tag inside the page instead of putting it at favicon.ico like everyone else. I don't want to have to actually download the page to get it, so it just doesn't show. (for defaults, I added support for those custom locations by just sticking the custom locations in a file) I, however, do have plans for adding a (possibly persistent) favicon cache that could at least allow for default favicons here (which the current API doesn't support), and if I'm feeling insane, I might be able to add support for those arbitrarily located ones from meta tags. Not a high priority, though.

As to first load, I made a choice to not attempt to show the Flagfox icon until it's possible to show a flag. Firefox doesn't make the needed info available after page load. I'm working on a new cache that could let me work around this limitation a bit; still a WIP, though.
Flagfox: FAQ - Changelog - Mozilla Addons - Blog
@NullDereference
Top

I didn't want to maybe violate Forum Guidelines.
Sure, since you asked.
https://addons.mozilla.org/en-US/firefo ... bookmarks/